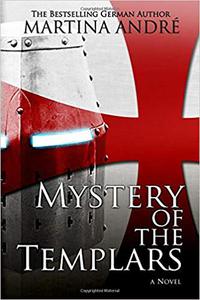 Mystery of the Templars

One man stands between slaughter and salvation.

France, 1307. The French king calls for the arrest and execution of all Knights Templar. Young Templar Gero embarks on a secret mission. Not only his life, but the fate of the Templars depends upon his success. In his rucksack he carries an ancient artefact that protects his brethren from extinction. What Gero doesn't know - the artefact enables time travel.

After a clash with bandits, Gero and his squire land in modern Europe. When the Medieval knight awakes from his injuries, historian Hannah is the first person he sees. Gero is distraught. Electricity. Airplanes. Culture clash. What has happened to the Templars? Can Hannah help him?

Gero and Hannah team up with rogue scientists to unravel the truth behind Gero's impossible journey. But that truth could be deadly. As they dig deeper, they find a trail of lies, conspiracy, and deceit. The government has been performing illegal experiments. Gero is an unwilling participant.

Slowly, the Templar knight adjusts to this new world. For the first time, he struggles to keep his vow of abstinence. One thing is clear: Hannah is the only woman who has challenged Gero's celibacy. How will he choose between his sweetheart and the Templars? Can he make it back to the Middle Ages to rescue his fellow knights?
Mystery of the Templars is an epic novel for fans of the Outlander series by Diana Gabaldon and A Hangman's Daughter Tale series by Oliver Pötzsch.

Author Martina André has woven an enchanting adventure of valor and intrigue. Referencing actual towns, historical landmarks, and authentic family names, André has tirelessly researched the Knights Templar and the legends they inspire.